On December 1, 2021 at 11:59pm, the Major League Baseball (MLB) Collective Bargaining Agreement (CBA) expired. The CBA is an agreement between the MLB and the Major League Baseball Player Association (MLBPA) that addresses rules of employment and the financial structure of baseball. Without another CBA put into place, MLB owners voted for a lockout, in hopes to push the union to be more urgent with their negotiations. During a lockout, no trades are allowed, no use of any team facilities are allowed and teams are not allowed to talk to players. In other words, baseball is put on a pause which threatens the 2022 MLB Season.

A new CBA has been very difficult because the players and owners want different things on the agreement. The owners want to expand the playoffs to make more money. Additionally, they want to lower the amount of money the team spends on their players. On the other hand, the players want to fix the tanking problem. Tanking is when a team purposely loses games in order to save money and earn higher draft picks. Also, the MLBPA wants an agreement put in place that protects younger players from being held back from Minor League Baseball.

Many Major League Baseball events have already been canceled because of the ongoing lockout. The annual MLB Winter Meetings that usually occur in early December were cancelled. Winter Meetings are a four-day event in which 30 representatives from each MLB team and 120 Minor League Baseball affiliates come together to discuss business and trades. On February 18, Major League Baseball announced that Spring Training will start no sooner than March 5. Unfortunately due to the delay, about six to nine Spring Training games per team will not be played.

No free agency signings has been a huge problem for players and teams during the lockout. A free agency allows players to become free agents upon reaching six years of Major League service time or when they are released from their organization prior to reaching six years of service time. Free agents are eligible to sign with any club for any terms to which the two parties can agree. The lockout means that the free agency process is frozen which affects many big-name players such as left fielder Kyle Schwarber, pitcher Clayton Kershaw, designated hitter Nelson Cruz, first baseman Freddie Freeman and many more.

Many baseball fans at Howard High School are worried about how the lockout will affect the upcoming season. Sophomore Jeremy Hahn stated, “I think that it is very unfortunate that the lockout has occurred, however in terms of baseball at Howard it does not affect the players as much because we can still play our season.”

Monday, February 28 was supposed to be the deadline for reaching a new CBA. Major League Baseball created an extension for the deadline to Tuesday, March 1 at 5:00 pm Eastern Time. although the MLBPA rejected MLB’s “best and final offer.” Since the deadline is over, MLB’s commissioner, Rob Manfred stated in a press conference that games will be cancelled. For the first time in 27 years, regular season baseball games will be cancelled due to a work stoppage. Opening Day for the 2022 season was supposed to be on March 31, 2022, but due to the lockout, the game will be set back at least one week.

Although the future for MLB is uncertain, players and fans hope a new CBA will be made in order to experience the excitement of the Major League Baseball season. 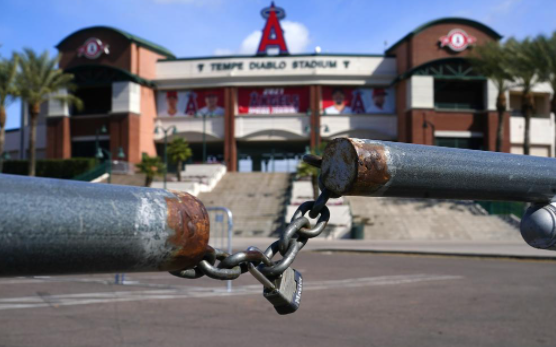