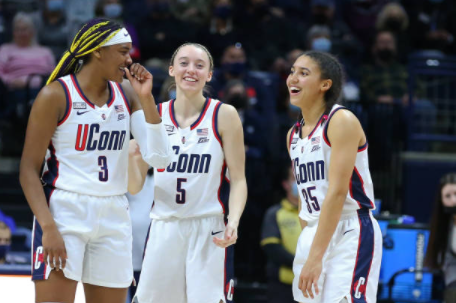 STORRS, CONNECTICUT, FEBRUARY 27, 2022 - From left, UConn’s Aaliyah Edwards, Paige Bueckers and Azzi Fudd are seen laughing during a game against Providence College. The UConn Huskies ended up winning 88-31. M. NESMITH/ICON SPORTSWIRE
The 82 annual March Madness tournament is coming up and basketball fans are excited. Howard High School junior Nic Miller stated, “I love the vibes you get from March Madness, and the energy each team gives. I'm excited to see Paulo Banchero and Chet Holgren pop off.” The men’s March Madness bracket will be announced on March 13, while the women’s bracket will be announced a day later, on March 14.
With a collection of talented teams and even more sleepers, this is shaping out to be one of the most exciting tournaments ever.

The championship favorites include six teams: Gonzaga, Arizona, Kansas, Duke, Kentucky and Purdue. After coming up one game short of a perfect season, Gonzaga is looking to rewrite history once again. Arizona has bounced back into the tournament after years of mediocrity. Kansas and Kentucky are seemingly in this discussion every year with top recruits. Duke has the most sentimental story, with it being veteran Coach Krzyzewski’s (Coach K) last season. Fans can expect a deep run from them with freshman Paolo Banchero leading the charge. Purdue is a popular pick as well, but considering no Big Ten team has won since 2002, an early Purdue exit may be in store again.

Second tier teams definitely have a chance to win it all. These teams include Auburn, Villinavova, Providence, Texas Tech, Baylor and UCLA. Auburn, who was previously ranked first, have had a couple bad losses to Arkansas and Florida in the span of three weeks, but they have impressive freshman forward Jabari Smith, paired with stud big man Walker Kessler. Villinova, who won the March Madness tournament just four years ago is ranked eighth currently. The Villanova Wildcats have been climbing to the top; head coach Jay Wright has and always will keep the team in the mix. Providence College is arguably the most surprising team in all of college basketball this year as they've been able to pull off many tough wins including a three overtime game against Xavier on February 23. They’re not the flashiest pick, but do not sleep on this team. Texas Tech wasn't even ranked to start the year, but after impressive wins against Baylor and Texas twice, this team is a force to be reckoned with. Baylor would not be in this tier if it wasn't for the fact that they won the whole tournament last year against Gonzaga. That being said, they had moments of dominance and monet of dysfunction, all with a mix of injuries. The same could be said for UCLA, after a shocking run last year lead by junior Jaime Jaquez and junior Johnny Juzang, this team has had their fair share of ups and downs.

The next tier of teams include Wisconsin, Tennessee, Houston, Arkansas, University of Southern California (USC), Illinois and Texas. Wisconsin lacks super power since their star, Johnny Davis, was injured, but their supplementary cast has been good enough to get by and win at least a share of the Big Ten championship. Tennessee could be higher, as they have some good wins, but they have plenty of bad losses as well. Houston's schedule has lacked competition but a 24-4 record is hard to argue with. Arkansas has knocked off the number one team in the country twice this year, but lost to some unranked teams like Vanderbilt and Hofstra. USC is probably the worst team in this tier, but they're in this tier of teams because like many other teams, they have impressive wins. USC’s Head Coach Andy Enfield has been turning heads. A deep run may not happen, but they have to be mentoned. Texas has benefited from a lackluster schedule but they've been winning games nonetheless. Finally Illinois is a team you don't want to play in March, yes they've lost games but seven foot junior Kofi Cockburn, Alfonso Plummer and Andre Curbelo have all faced significant injuries. This team will make a deep run this year.

Alabama, Iowa, St. Marys, UCONN and Michigan State are teams that most likely won’t go far in the tournament. Fans don’t expect much from these teams, but crazier things have happened before

In the women's tournament this year, South Carolina has absolutely run every other team off the court; they're the clear and obvious favorite. South Carolina last won the tournament in 2017, and the team has high hopes of returning. Stanford, NC State, Lousivlle and Baylor are all teams that could knock them off, but it will take an almost perfect performance to beat the top dogs. The Big Ten has five teams in the AP Top 25 in a row from places 10-14 being Michigan, Maryland, Iowa, Ohio State and Indiana. The AP Women's Top 25 is dominated by power five teams. The usually dominant UConn, is seventh, which is considered a down season for the Huskies, but 2021 WBCA Freshman of the Year, sophomore phenomenon Paige Bueckers has been on and off the court with injuries. Paige Bueckers’ first game back after her injury was against St. Johns where UConn dominated and won 93-38. Bueckers only played twelve minutes, but scored eight points for the Huskies. Another impressive player is freshman Azzi Fudd. Fudd was ranked number one in the country for girl’s high school basketball last year. Although UConn isn't their usual dominance, Bueckers, Fudd and veteran Coach Geno Auriemma who has led UConn to win 11 NCAA Championships is more than enough to lead them to yet another national championship.