Caroline Starvou '22  Staff Writer
The Howard High School auditorium was spotted collapsing during the end of January this year. The school had construction professionals come in to assess the building and it was determined that performing any further in the auditorium this school year was unsafe. The problem lies within the hanging tiles that are suspended from the ceiling above the audience. The stage portion of the auditorium is safe. Clue, the musical theatre production, was performed on only the stage. The actors pushed all the backdrops upstage and the audience was able to sit all the way downstage. The Spring Dance Concert is most likely going to be held in the main gym instead of the usual auditorium.
The lack of an auditorium has had a huge impact on many of the performing arts at Howard High School. The ceiling tiles were most likely unstable during the students’ performances in the fall. When asked if she knew how long it had been unsafe for performances to occur in the auditorium, Mrs. Crisera, the director of dance at Howard High said, “I noticed a ceiling tile missing during rehearsals for the dance concert. This was the week right after Thanksgiving break/first week in December.” While unsure of the cause, Mrs. Crisera did say, “There was a ‘flood’ from a custodial closet in the auditorium lobby that occurred in mid-November. The flood caused damage to some areas in the auditorium/stage.” There is some speculation surrounding this flood and it is thought to be a possible cause of the ceiling tiles falling. 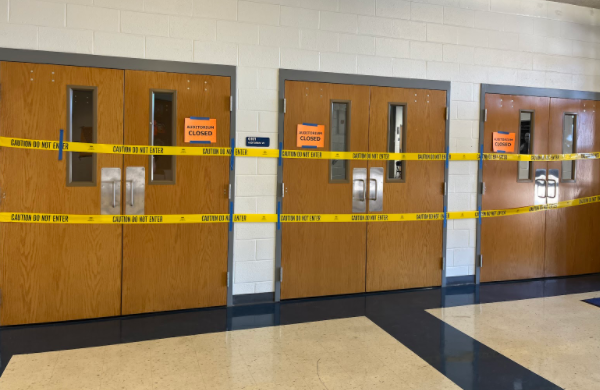 ELLICOTT CITY, MARYLAND, MARCH 1, 2022- The auditorium has been blocked off from all visitors due to the falling ceiling tiles. Students are cautioned to not enter the auditorium at risk of their safety. C. STAVROU/ HOWARD LIONS TALE
Click here to Return to NEws